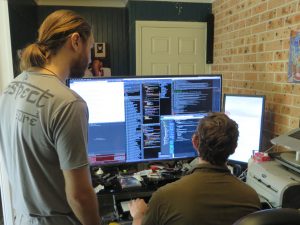 Having lodged our visa applications, we were free to head west to the Blue Mountains. We had arranged to stay with our friend, Joe, for a couple of nights. Joe lives in Warrimoo. It is one of the first Blue Mountains towns the train reaches as it heads west from Sydney. 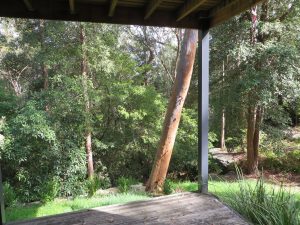 Joe works from home, and has the most amazing work set-up. And the most amazing outlook from his home office. We were envious. But, of course, when you have to carry everything you own, ginormous flat screen monitors are not really an option.

The Blue Mountains are an eroded plateau, so they rise very abruptly from the plains of Western Sydney. The highway and train line run along a ridge. Just about every home has some kind of view over the Blue Mountains National Park, or areas to steep to build on. 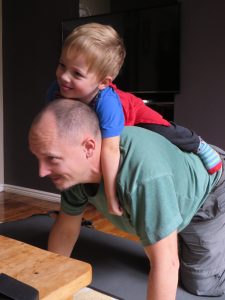 We had a fabulous time catching up with Joe. Some of our Sydney friends dropped by on their way home from visiting Blackheath, another Blue Mountains town.

And Joe very generously lent us his car for the weekend! Gratitude beyond measure.

On Friday morning, we headed back down to Sydney. It was the big day – the 21st birthday party for Jenny’s twins, Eron and Rachael, and “the third twin”, Leash. Leash is three weeks older than Erin and Rachael, and the three have been inseparable since they all bailed out of Forest High to maintain their sanity. 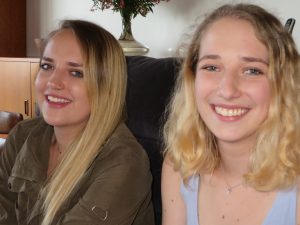 These girls have been the Three Musketeers for a long time. 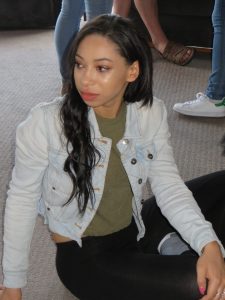 Now that Rachael has moved to Melbourne, Erin and Leash are sharing a house with a third young woman in St Peters.

Leash’s mother, lost her long battle with leukaemia a year ago, so it is a particularly emotional time for everyone.

Grandma went all-out to make this a fantastic 21st for all three girls.

We arrived a couple of hours early, to help with the setting up. Grandma had an excel spreadsheet of food items, actions and timelines up on the wall.

We shuffled furniture, plated nibblies, and said “hello” to each batch of relatives who arrived from far-flung places. It was the most comprehensive family gathering in eight years. Only Rachael’s boyfriend, Josh, was missing, because he wasn’t allowed time off work. 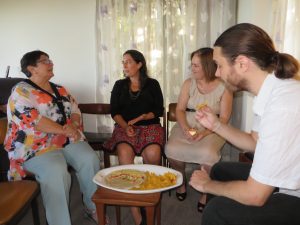 Those who were staying in the house showed great restraint, and didn’t break into the dip until the birthday girls arrived. Even though there were two platters of it, the whole lot was gone in short order!

Grandma had compiled a photo montage of all three girls from their baby days to the present, and it caused great hilarity.

Nana Dell made the birthday cakes – one for each girl. She stalked them on Facebook to discover their favourite cakes, and surprised them.

There was, as always, a superabundance of food. This time, there was an entire table of vegetarian food, because the population of vegetarians in the family is steadily increasing.There was a smaller table of meat dishes, but the vegan pickings were somewhat more slender. 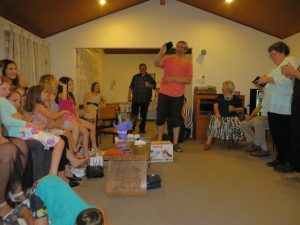 At some point, a powerful organiser managed to get the burthday girls and ALL their cousins to sit on and around the couch at the same time. This created a flurry of “parentarazzi” activity, because this is the first time ever that all the cousins have been in the same place at the same time. The resulting photos of all the cousins will not be shared on the internet because of privacy concerns for some individuals. 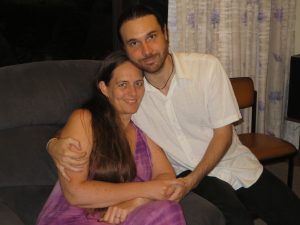 After the birthday party, we had a weekend in Sydney to catch up with friends and the relatives from out of town. Our gracious hosts were Jenny’s sister Lois, and her husband and children.

We had a gathering of friends in Marrickville on Saturday afternoon, and then had dinner with Jenny’s daughter, Rachael. On Sunday, we headed to Balmoral to catch up with a Melbourne friend we hadn’t been able to see in Melbourne, and has fish and chips with David, BJ, and Alexis before they headed back to Victoria. 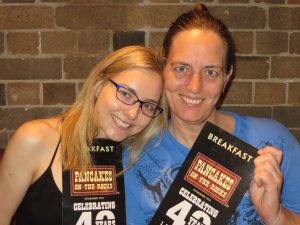 On Monday, we had lunch with Jenny’s daughter, Sam, before picking up our passports from the Thai consulate. At Sam’s request, we went to Pancakes At The Rocks, a place we had often taken the girls when they were kids.

Pancakes At The Rocks is right by Circular Quay, the part of Sydney Harbour where the ferries come in, and where the big cruise ships come to port. 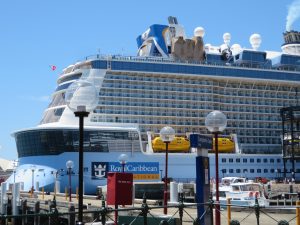 After lunch, we walked down to the waterside and admired the huge cruise ship anchored at Circular Quay.

Since we were in tourist mode, we figured we would walk up to the Thai embassy in Macquarie Street via the Opera House and the Botanical Gardens.

It was a beautiful, sunny day, and the photo opportunities were postcard perfect! 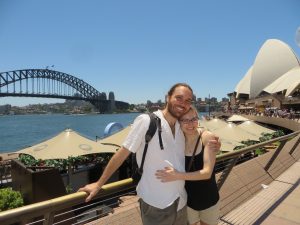 Sydney Harbour is seriously one of the most beautiful places on Earth.

We ended up spending the whole afternoon with Sam, talking about life, the Universe, and everything. It was great to catch up after being away for two and a half years.

We made sure we got all the right tourist shots: 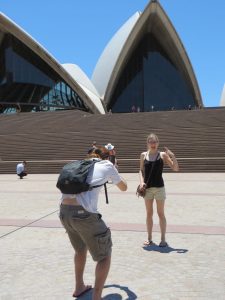 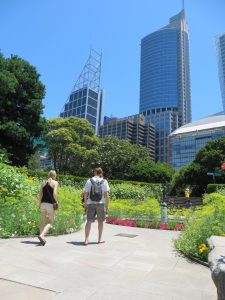