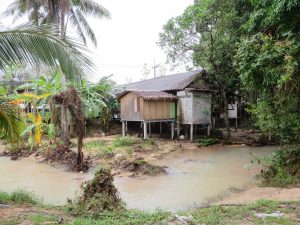 Koh Phangan had some wild times while we were away. Not one, but two separate disaster-area level floods. Since our house is by a stream, it could have been very unfortunate for us!

Fortunately, before we left, Ravi decided to bring both out motorcycles up the hill and stash them under houses, so they wouldn’t get rained on while we were away.

The area where they would have been parked was more than a metre under water! 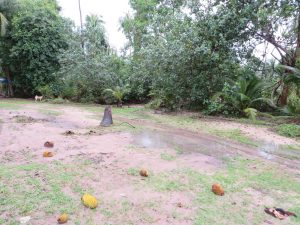 Even when we arrived back, a week after the waters had started subsiding, the stream was still very full. There was standing water where our motorcycles would have been parked.

The friend who stayed in our house while we were away was flooded in for a while. This entire area was under a metre of fast-moving water. 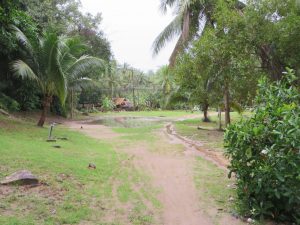 It’s hard to imagine, because the island is so sandy, and the ocean so close.

Mama Pooh’s Restaurant, whose roof you can see across the road from our driveway, was almost completely submerged in the flood waters.

And the most incredible thing about this flooding is that it happened in the middle of the dry season. Usually the rainfall is absolutely zero during the month of January. 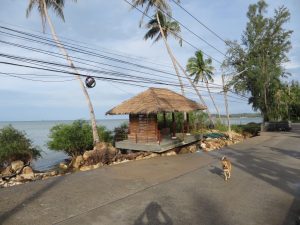 Farther south down the coast was another place where water gushed off the island, a metre or more deep. This sala on Hin Kong beach developed quite a lean! The earth underneath the slab was eroded by flood waters. The edge of the road was also undermined. A few days after we took this photo, some cones were put up to stop vehicles from breaking pieces off the edge of the road. 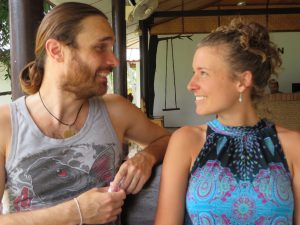 We discovered that some old friends were back on the island. Melanie (pictured here with Ravi) was here two years ago with her husband. She came back on her own this year to do some more yoga study.

And, of course, the Agama regulars were all either on Koh Phangan already, or arrived in February or March. We now have many friends among the regulars. This time of year is a constant parade of excited reunions. 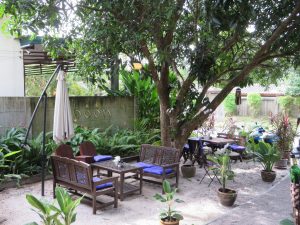 Taboon Restaurant (our living room, even when the A/C stopped working) had a facelift while we were away. New, bright purple seat cushions!

It was around this time that Ravi discovered Bai Jai. An air-conditioned restaurant on Hin Kong beach with good WiFi and cheap, good Thai food – bliss! 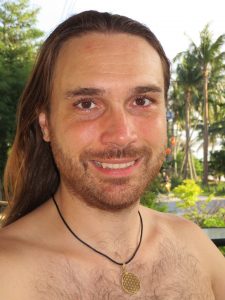 We still love the Middle Eastern food at Taboon, and Clara, the owner. But until the air conditioning is fixed, Taboon cannot fulfil all our relationship needs.

We had a fixed arrival date, because Ravi wanted to start the Agama kundalini program. It was running for the last time in its current format, so it was now or never.

Kundalini yoga involves practices which move a lot of energy in the body. Traditionally, students would be introduced to kundalini practices after several years of hatha yoga. The hatha yoga clears out the system and prepares it to tolerate large amounts of energy movement without any ill effects. 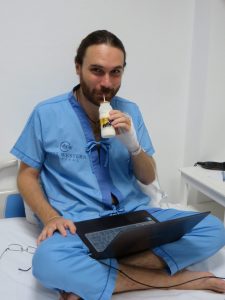 Ravi had to leave one of his kundalini classes and go straight to the hospital, because he had a very high fever.

Turns out he had dengue again. Again!

Even more strange, he had the same strain of dengue again. This is theoretically impossible. You are supposed to have antibodies and be immune to any strain after you have it once.

It was nowhere near as serious this time. His blood counts never dropped into the danger zone. He was cleared to leave hospital after a few days.

He was even well enough to work on his computer in hospital. 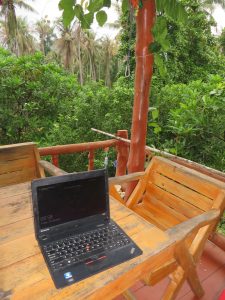 During this time, we finally got around to making our new house into a home. We moved from House 1 to House 3 in November, but didn’t do much to settle in before we headed back to Aus for Christmas.

Jenny developed a great fondness for working on the front porch, overlooking the coconut palms.

She became quite fascinated with the unprecedented drama in American politics triggered by Donald Trump. Although nobody pays her, she started a Twitter account specifically to support The Resistance. From inauguration day onwards, she spent a bit of time each day keeping tabs on the erosion of democratic norms. 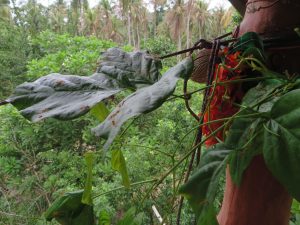 In this time, Jenny also tackled the Invasion of The Fire Ants.

During our absence, perhaps during some of the storms that caused the floods, a hanging pole fell down. Combined with a fast-growing vine, this created a bridge from a nearby tree. Vicious red ants were quick to establish feeding trails along the hand rails and the washing line. 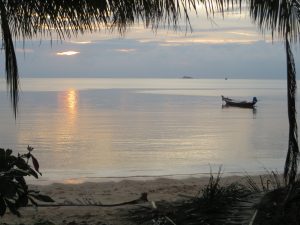 Just to complicate matters, the pole was hollow (made of bamboo), and home to some native bees.

Jenny managed to undo the bridge with only one bee sting and no ant bites. We called that a victory!

No home is complete, of course, without a cat. There were a couple of cats that hung around the houses, left by a previous resident called Phillip, according to the neighbours.

However, they weren’t the friendliest of cats. 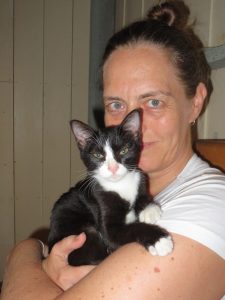 On impulse one day, we stopped by PACS, the Koh Phangan animal rescue service. We thought we might foster a mother cat with kittens, or possibly adopt a pair of kittens.

They only had a single kitten – all his litter-mates had been adopted already. Logic said this might not be a good idea, because we were out of the house a lot. A single kitten might get lonely or anxious.

But he love-bombed us the moment we stepped into his enclosure, so we just had to adopt him.

We made a quick trip into Thongsala for litter, litter tray, food, and a collar, and picked him up on the way back. Suddenly, we were a family again! 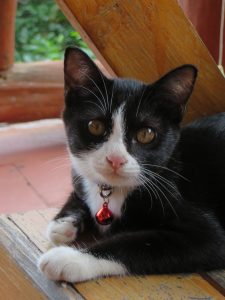 At PACS they called him Raja, but we weren’t sure about that name. We toyed with Jai (Thai for “heart”), because he was so loving.

Eventually, we came up with Krishna (which means “black” in Sanskrit), and that really seemed to fit.

There was an adult cat at PACS that Krishna had been playing with in “Social Time”. PACS were keen for us to adopt him too, as he had been with them for some months.

We said we’d take the kitten home, and see how he went.

We found the other cats were quite nasty to poor Krishna. He got a nasty scratch on his stomach pretty soon after he arrived. 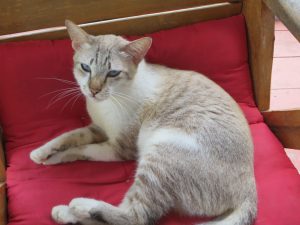 Not entirely unexpected, but getting him a big adult bodyguard seemed like a good idea. So we said we’d foster Hero for a month, to see if he could integrate into the community. PACS warned us that he was pretty aggressive with other animals.

At PACS, he lived on the porch of one building, and kept at bay the three dogs and one pig who might also have lounged on that porch. This made him difficult to home, because most animal-lovers on Koh Phangan have more than one animal. Hero had already been returned from foster trials more than once for failing to get along with his new fur brothers and sisters. 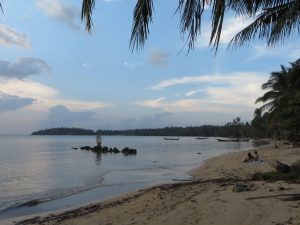 We took the male cat from around the bungalows to PACS to be neutered, and they home delivered him the next day, along with Hero.

It didn’t take long for us to establish that Hero adored Krishna and would never hurt him. He also started a campaign of intimidating the female cat that had slashed poor Krishna’s belly. Things were looking good.