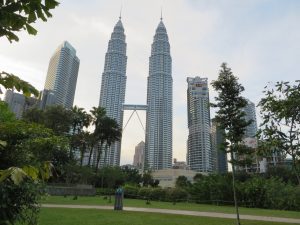 Because of the competing claims on Ravi’s actual birthday, we indulged in an extended birthday week. The culmination of this week was a fabulous day in Kuala Lumpur, including a visit to the famous Twin Towers.

We began with a stroll through Kuala Lumpur’s city park, which stretches out over several acres behind the iconic Twin Towers. 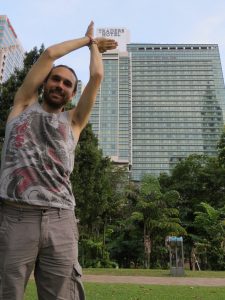 The park is an oasis in the busy city, a complete contrast to the concrete-covered plaza in front of the Twin Towers, which has busy roads on three sides.

City Central Park is surrounded by small, quiet, curving streets, which are home to a range of hotels, office buildings, and restaurants. Once you are in the park, you can barely hear the noise of the city.

Here, Ravi points out the rooftop bar at Traders Hotel, backing on to the park. We planned to watch the sun set from there, after our stroll.

It was quite lovely, after our time in Thailand and India, to wander through a manicured, well-laid-out clean, spacious public park. With green, green grass. 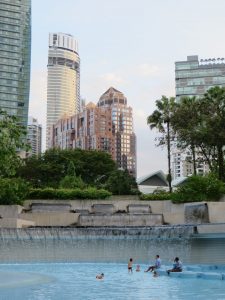 A feature of the park is an extensive swimming pool. It is shallow, with waterspouts and waterfalls. Unfortunately, you need to have a child with you to enter the pool. Ravi was unceremoniously shooed away by officious city employees in two different locations.

There is also a large lake, with bridges across it and winding paths around it.

In almost every direction, there was a lovely vista, or, if you happened to be looking toward the Twin Towers, a spectacular vista.

As the sun started to approach the horizon, we wandered into Traders Hotel, and took the elevator to the top floor bar. 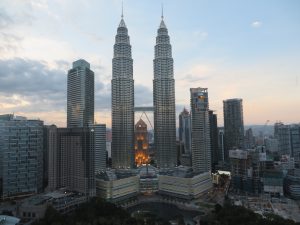 There is a swimming pool INSIDE the bar! And it has what must be one of the best views of the Twin Towers in all of Kuala Lumpur.

In the lake at the foot of the Twin Towers is a circular fountain. As the sun went down, the lights came on, reflecting through the water in rainbow colours. 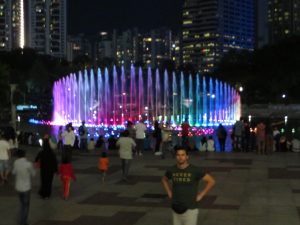 After a good quality Mexican meal, and a jaw-droppingly spectacular sunset show from the Twin Towers, it was time to go. We decided to hop on the free shuttle train that runs around the outside of the park, and visit the Twin Towers up close.

The lower floors of the Twin Towers are a shopping centre, so we were able to locate a suitable dessert venue –  a waffle house!

Many calories were consumed … 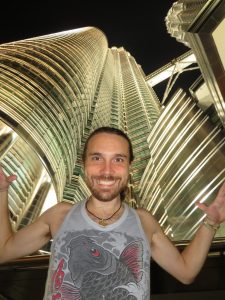 Stuffed full of rich, chocolatey waffle and ice cream, we rolled out the front doors of the shopping centre to view the Twin Towers from the traditional direction.

And some less traditional directions!

And the next day, we boarded our flight to Thailand!

To see the entire sequence of sunset images, check out the album:

“A few days of R&R in Kuala Lumpur while we get our Thai tourist visas and celebrate Ravi’s 34th birthday.”