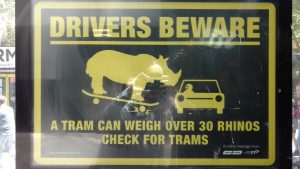 Melbourne, Australia, city of four seasons in a day, was in high summer when we arrived. Which is why it was a top of only 19 degrees Celsius. Brr!

We chose Melbourne as our first port of call because Jenny’s daughter, Rachael, moved there to study osteopathy. She lives with her boyfriend and three cats.

Jenny also has a sister-in-law just north of Melbourne, in Wandong. (Jenny kept her in-laws when she divorced the father of her children.)

We arrived late at night, so we booked a hotel in the CBD, rather than disturbing relatives with a late arrival. Unfortunately, the other occupants of our floor (and an Indian ladyboy, who, it turns out, was not even a hotel occupant) were having loud conversations and running from room to room with much door-slamming. Eventually, at 1:30am, Ravi put on his +1 Towel of Intimidation, strode out into the hallway, and told them all to shut up. Ladyboy left, and peace descended. 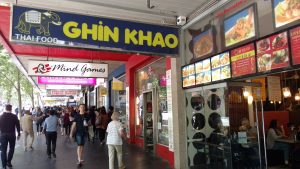 We were up early the next morning for breakfast with Rachael, and then we had a bit of time exploring the city. Buying fluffy socks was a survival priority! A Thai restaurant whose name translated as “eat a meal” (literally, “eat rice”), gave us a giggle.

We dropped in to a Bank of Melbourne branch to use the ATM, and were horrified by the whole-wall video torture inflicted on the people queuing for the ATMs.

At McDonalds, we wondered how someone got hotcakes at 1pm. (We would later discover McDonalds has introduced All Day Breakfast – the only thing that would entice Jenny across their threshold after 10:30am!)

In the afternoon, we caught up with Simon, who had moved from Sydney to Melbourne while we were away. You may remember him as our housemate of two months during our last Sydney visit two years ago. 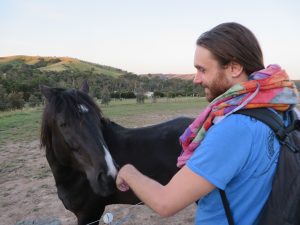 Finally, it was time to join our brother-in-law, David, for the drive out to Wandong.

David and BJ have six horses. Well, to be honest, BJ has six horses. David has a very impressive shed full of farming equipment.

We enjoyed some glorious tranquillity, and caught up. We discovered it had been six years since Jenny and BJ had a proper conversation! 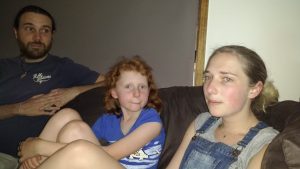 On Tuesday night, we took a lasagne to Rachael and Josh’s place for a big family dinner. We met the cats, and had a great time.

The next day, Wednesday, we travelled back into the city to meet up with Sebastien, a friend from Koh Phangan. Coincidentally, since we all did the ATI (Agama Tantra Initiation) together, he and his partner Laura had moved to Melbourne! 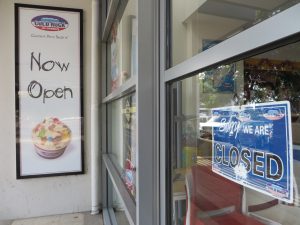 Step one was to go to a shopping centre and buy a Myki card to use public transport. Bj had one spare she could lend us, but you can’t tap a Myki card twice to pay for two passengers.

This shopping centre was notable for having Shroedinger’s ice cream shop (both open and closed at the same time).

We took the opportunity to grab a bite of food while hunting for a vendor of Myki cards. It was turning into a bit of a mission to buy these cards. Why can’t you just buy a ticket on the freaking tram? 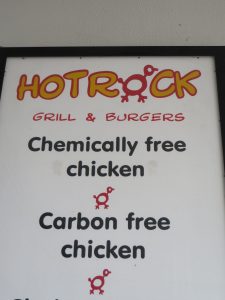 What this shopping centre did not feature, as it turns out, was any vendor that sold Myki cards at all.

They suggested we walk a kilometre or so to the university library, and buy a card there.

We decided to take the risk of hopping on the tram with only one card, and buying another one in the CBD.

Eventually, we arrived in the CBD at exactly the same time as Sebastien arrived on another tram from the opposite direction. 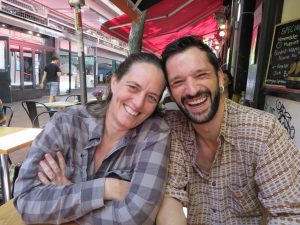 We ended up spending most of the day together, and it was wonderful to catch up after spending over a year apart. There is something very special about the connections you make in the ATI.

The next morning, we spent some time in the classiest coffee shop in Wandong. BJ had some work to do before she drove us to the airport.

It was sad to say goodbye, but we knew we would be seeing David, BJ and Alexis again in January, when everyone came to Sydney for the combined 21st birthday party. And Rachael, of course – she was one of the three birthday girls.