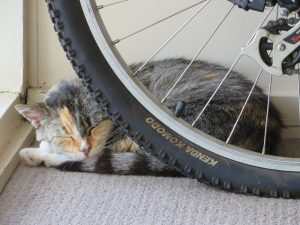 Back in Sydney, our first task was to familiarise ourselves with our new housemate – Alex the Trauma Cat. We would be house-sitting (and Alex-sitting) for two weeks, while her humans had a much-needed break in Japan.

Alex’s favourite place was the corner behind the bicycle – it was here she felt most comfortable.

Her story is quite amazing, too. 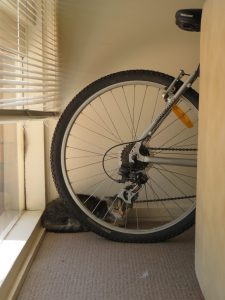 Alex appeared as a young cat near the house where Luke’s mother and brother lived. It took them six months to get her confident enough to set foot inside the house. Eventually, they managed to get her spayed, vaccinated and microchipped.

A couple of years later, they moved house. Not realising what this would mean for Alex, they opened her cat carrier while removalists were still carrying boxes into the house. Alex shot out the door and disappeared.

Eight years later, Luke’s mother got a call from the RSPCA – “We have your cat”. 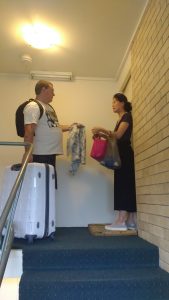 Someone must have taken care of Alex for all those years, although the family will never know who that was, or why Alex ended up at the RSPCA.

In the meanwhile, Luke’s brother had succumbed to cancer, and his mother now lived somewhere that didn’t allow pets. Luke decided to take on responsibility for Alex.

Given her traumatic history and skittish nature, Luke and Machi really didn’t want to put Alex in a cattery while they were away. She had only been with them a couple of months at this point, and was still settling in. They were very happy that we were available to cat-sit. And we were very happy to have a home base for a couple of weeks!

We had one night with our friends before we took them to the airport to board their flight. Jenny spent an hour on the first afternoon gradually moving closer and closer to Alex, making encouraging cat “hello” noises, and doing slow blinks (the cat equivalent of a smile). Eventually, she was allowed to touch Alex’s fur.

Apparently, our level of rapport with Alex was unprecedented. We were the first visitors to the apartment that got to see her – she spent the whole time under the couch with all previous visitors. We all took this as a good sign that Alex was going to be comfortable with us as house-sitters. 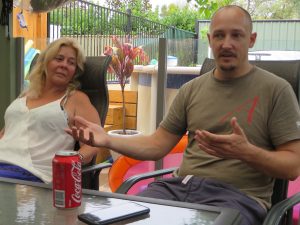 The next day, we went to visit friends who live in Engadine, in the south of Sydney. Shane and Vanessa became parents just after we left Sydney, and their son is now two and a half! We also got to see Carmen, who is a fellow frequent traveller.

We had a great chat about life, the Universe and everything, which resulted in Shane and Vanessa seriously considering coming to Koh Phangan for a few months in 2017. 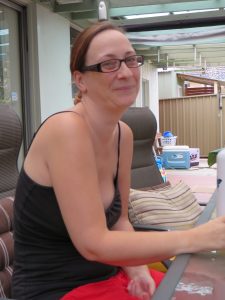 Ravi was very excited at the prospect of having someone to work with on IT projects.

Shane is one of the creators of Rbutr.com, a plug-in that provides alternative points of view to web pages as you browse them. It is in the early stages, and all the coding has been done by volunteers. Shane is not a coder, and he has been getting quite frustrated at being unable to make repairs and improvements in a timely manner.

Shane is hoping to get funding to do more work on Rbutr, but has been hampered by lack of technical resources.Ravi has always been interested in Rbutr, and is looking for a project to add to his portfolio. It seems it would work well for them to collaborate for a while. 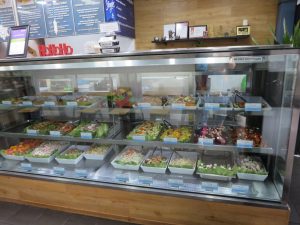 We took a quick break from plotting world domination to go out and grab some salads for lunch.

One of the great things about Sydney is that fresh ingredients are always available, and there is sufficient demand for an outer suburban fish-and-chip shop to boast an array of salad options like this!

It is easy to eat healthy in Sydney. 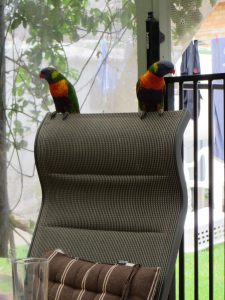 We were joined at lunch by a gamut of Australian bird life, including two rainbow lorikeets, who has no fear about joining us at the table.

Sydney is a big city, but there are national parks on the three sides that are not ocean. Rainbow lorikeets are common in all the suburbs of Sydney that are close to bushland.

We also had a white cockatoo come and sit on the pool fence. It wasn’t quite as brave as the lorikeets.

Foreigners are thrilled to see white cockatoos, but those of us who grew up in leafy suburbs of Sydney remember white cockatoos as those things that descend in packs and literally EAT your wooden verandah! 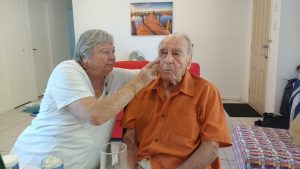 On Christmas Eve, we left Alex alone most of the day to attend a family lunch at Buff Point, an hour north of Sydney on the central coast, and the drove back to Sydney for a family picnic at Little Manly.

The lunch gathering was for Ravi’s mother’s family, and it was a slightly sad occasion. Piki, Grandpa’s girlfriend of 30+ years, is moving into a retirement village in Sydney soon, and they will no longer be able to see one another every day. 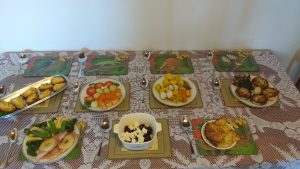 After so much driving and socialising on Christmas Eve, we were glad that Christmas Day would be a low-key affair – just lunch with Jenny’s parents at Beacon Hill.

The food was, as usual with Jenny’s mother, quite spectacular. 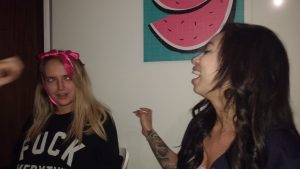 On the way home, we thought we would check in with Jenny’s daughter, Erin, and adopted daughter, Leash. They were spending Christmas alone, because it was Leash’s first Christmas without her Mum, Louisa. Louisa finally lost her long battle with leukaemia just after Christmas last year.

It turned out that they were in a state to have visitors, so we stopped in and they adulted us a lovely cheese platter.

We had a quiet week between Christmas and New Year, getting lots of work done in the blessedly cool air conditioning with Alex.

We maintained a constant campaign to have her socialise, and we definitely made some headway. She doesn’t normally get up on anything – her back legs are remarkably scrawny and lacking muscle. And she definitely doesn’t sit on people.

What can we say? We have our ways …

We had a fabulous visit from our friends, Kevin and Marci, and somehow managed to spend five hours conversing over a mid-afternoon cheese platter.

Marci is a lawyer, and had some great insights to share about some Fair Work issues that Erin was experiencing. Kevin is an artist, and they were on the verge of releasing a pack of cards called “Role vs Roll”, which can be used with any role-playing game to get players to focus on character development instead of technicalities. (Role vs Roll is now available for purchase here.)

Kevin and Marci had the misfortune to live in Homebush, where construction has begun on the much-protested Westconnex tunnel. With all the noise and dust the construction was creating, hey were seriously considering moving to the Blue Mountains in a year, when their daughter finishes high school. 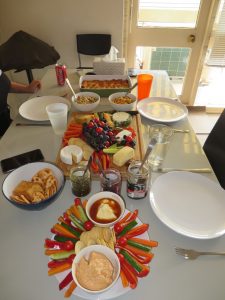 We had a quiet New Year’s Eve, just the two of us. On New Year’s Day, we hosted a very hung-over Erin for a recovery meal in the afternoon. Jenny went all out with the catering, even producing cheesy potato bake!

We weren’t sure whether Leash and her boyfriend would also be coming. They didn’t, but Erin took a doggy bag of cheesy potato bake home for Leash.

Erin arrived with hang-over sunnies on. After much protest over her lack of makeup, she eventually let Jenny take a photo of her without the sunglasses. 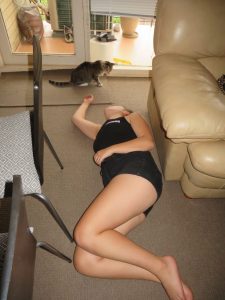 She invested quite a bit of time wooing Alex.

Alex was a bit less confident about Erin, but after extravagant demonstrations of goodwill from Erin, Alex did eventually deign to sniff Erin’s fingers.

Luke and Machi came back on Jan 3rd, and were very happy to find Alex so fat and relaxed. They were pretty tired, but we managed to get a bit of quality time in before they crashed out for the night.

The next day, it was time to apply for our Thai multi-entry visa. This visa is a recent invention by the Thai government, replacing the previous double-entry and triple-entry tourist visas. Thai consular staff get two public holidays for New Year, so January 4th was the first day the consulate was open. 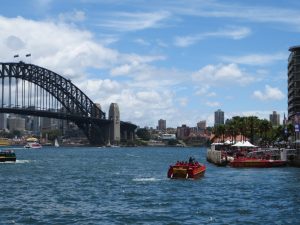 You can only apply for it in your home country. The six months of validity starts the day you apply. Therefore, it is really only feasible if you plan to travel directly from your home country to Thailand.

We hadn’t been planning on that, but the re-arrangement of the Agama kundalini program had forced our hand. We would need to be back on Koh Phangan by mid-January. Therefore, the multi-entry visa was a viable option. 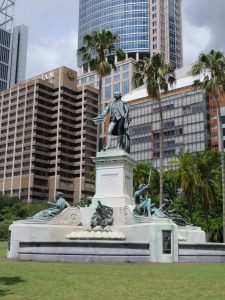 Fortunately, the Thai consulate is in Macquarie Street in the Sydney CBD, and the weather was glorious. We could do a bit of touristing in Sydney, as well as the boring admin.

We has all the required documents – or we thought we did!

Apparently, a print-out of a bank balance from a bank website is not good enough. We explained that we don’t get printed statements. The consular official suggested that we go and get the print-outs stamped by the bank.

A stamp makes it as good as a printed statement in the eyes of Thai bureaucracy, it seems.

Fortunately, Citibank has branches. If we banked exclusively with ING, we would have been toast at this point.

So, we schlepped across the Sydney CBD to a Citibank branch, printed out the statements we needed, and had them stamped. Then we schlepped back to the Thai consulate to lodge the applications.

Seems they only take cash. (It would have been nice to know that while we were at the bank.) 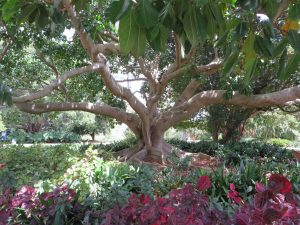 Ravi went for a walk to the nearest ATM to get sufficient cash.

Finally, the job was done! 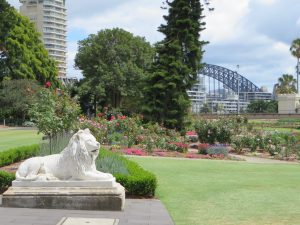 We were now in possession of the worrying information that the visas would not be able to be transferred in to our new passports. We hoped that we had not just wasted $550 AUD. Hopefully, we could delay collecting our new passports until after these visas were finished.

We rewarded ourselves with sushi in the Botanical Gardens, which have gorgeous views of Sydney Harbour.

And then it was time to strap on our packs, head to the station, and hop on a train to Warrimoo, in the Blue Mountains.

Our friend, Joe was waiting …