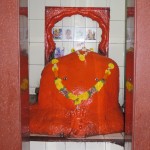 One of the biggest festivals in India is the Ganpati festival, dedicated to Ganesha, the son of Shiva. Statues of Ganesha are installed in shrines all over the city, and in private homes. On the final day of the festival, the statues are traditionally thrown in the river.

Since people have started using statues of non-biodegradable plastic, river pollution has become a real problem, so this year, the authorities installed tanks of water on the riverbank near the bridges from which the statues are traditionally thrown.

On the last day of the festival, we went out to watch them dumping all the Ganesha statues in the river. Jenny wore her best sari for the occasion, and got lots of surprised attention. There aren’t many white faces in Pune!

We got to the river nice and early, when they were still clearing away the water weeds, and found ourselves a vantage point where we could sit in the shade.

Ganesha needs to be fed, and wrapped in garlands of flowers, before he is thrown in the river.

The first few groups were families, carrying small individual family statues. The larger Ganesha statues were brought to the river on horse-drawn carts, very slowly, because of the huge crowds. We saw the carts hitching up and heading off, and we saw one of the larger statues within 200m of the river as we were leaving, but we had to get back to the ashram for lunch, so we didn’t stick around for the extra hour it was going to take it to travel those last few hundred metres!

A group of young men insisted that we join them in dunking their Ganesha. To reduce pollution in the river, the local government had set up tanks of water on the shore, and these young men were doing the environmentally-conscious thing and using the tank. We were again showered with prasad, and many photos were taken.

In the intersection nearest the river, many people had been working hard with coloured powder to make a huge, brightly coloured yantra (object of meditation). It was amazing that nobody smudged it, with all those feet in a small space!