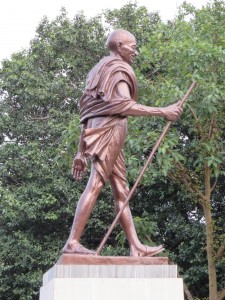 Train travel in India is very inexpensive compared with air travel. Encouraged by our generally good experiences with trains in Thailand, we decided to five train travel in India a try, and booked tickets on the overnight express train from Pune to Goa.

We don’t need air conditioning, do we?

No, it’s winter. It will be quite comfortable without air conditioning.

And so it was that we ended up travelling in the third class sleeper class, because first and second class had air conditioning.

We arrived at Pune Junction Station with plenty of time to spare, and admired the statue of Gandhi out the front. Gandhi spent a lot of time in Pune (some of it unwillingly, as a prisoner in the Aga Khan Palace) during the years of non-violent resistance to British rule. 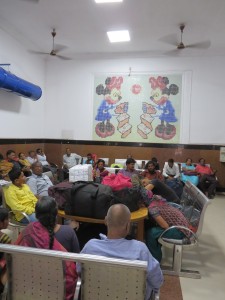 It turned out that the train was delayed, so we settled ourselves in the waiting room for an unspecified period of time. It was decorated with (probably quite unauthorised) posters of Disney characters.

In the end, the train arrived only an hour late – much better than the five hours late we experienced on our first train in Thailand!

We were on the platform, waiting, as the train pulled in, and were amazed by the scrum of people pressing to get in the doors, before the departing passengers even had a chance to get off.

What’s the point of rushing like that? The train has numbered seating.

We located our carriage, and climbed aboard with our backpacks. The first thing we noticed was the stench from the toilets. We crossed our fingers and hoped that someone would clean them before the train took off again.

We had actually booked three berths, so that we could stow our backpacks on the upper bunk (and chain them to the bunk for extra security). When we found our berths, they were fully occupied, with multiple people in each berth.

Since we had the two higher berths in a triple, and then a lower bunk at 90 degrees, we decided top expel all the intruders from the triple, so we could sit together until bedtime, and let them occupy the lower berth that we would try to swap with whoever got on and claimed the lower berth under our two higher ones. 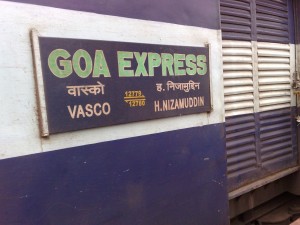 Fortunately, before we were forced to take a firm stand and get rid of him, the guy on our top berth decided the opposite top berth would be more comfortable, as it had no luggage on it, and he moved of his own accord. When the chap sitting with us went to the toilet, we both started sitting cross-legged, which meant there was no room beside us any more, and when he came back he sat on the opposite berth instead.

The ticket inspector came around, and it turned out that these extra people didn’t even have tickets! Some of them ponied up 190 rupees for non-allocated seating, and others got off at the next stop. More got on, though, and the compartment was just as crowded as before.

We folded down the middle bunk at about 9pm, and tried to sleep. No sheets or pillows were supplied. Fortunately, Jenny carries her own pillow everywhere we go. This quirk seems like insanity some of the time, and sheer genius at moments like this one.

The noise in the carriage was incredible. Some of the extra people tried to sleep three to a bunk, while others made no pretense about sleeping, and carried on conversations at the top of their lungs.

The entryway area between our compartment and the toilets was jammed full of people sitting on the floor, so every time someone wanted to get to the toilet, there would be a period of two or three minutes during which three to five people would be shouting at once, while people shifted around to make way.

Some time between 10pm and midnight, the people who had booked the two parallel lower bunks got on the train. They had a small child with them, so there was no possibility of swapping berths. Jenny had to evict three people from the berth that was actually allocated on our ticket, so she could lie down there instead. The extra people wandered off along the train, looking for somewhere else to camp.

The blessed relief was short-lived, though. We soon came to a station, and a large family group got on, and proceeded to load six children onto the middle bunk opposite Ravi, while Mum and baby sat on the floor by Jenny’s head. Mum carried on a conversation at full volume with the other family members, who were sitting on the floor in the entryway, until Jenny (as politely as she could) asked her to be quiet. The second time.

The people in the entryway, though, continued their raucous conversations, despite several requests for quiet.

No sooner had we started drifting off, when the ticket inspector came around. Cue another five minutes of multiple people shouting at once while tickets were purchased, or promises to get off at the next stop were extracted. We didn’t care at this point; we just wanted them all to shut up so we could sleep.

After several polite requests, Jenny stuck her head out into the entryway and said “Look, This is a SLEEPER car. Be QUIET!!!” As she had reached almost full volume yelling by the end of this sentence, there was a slight shock, and actual quiet descended.

We breathed a sigh of relief, and drifted gently off to sleep … only to be awakened by another round of multiple people yelling full volume at the same time. Jenny opened her eyes to see the original five interlopers from our compartment being escorted to the door of the carriage by the railway police.

The shouting continued for quite some time, as the five men had to climb over or through the members of he family sitting on the floor in the aisle of our compartment, and in the entryway, and the railway police, with four-foot long batons, were encouraging them to move along.

Eventually, the train stopped, the five men got off, and we started to drift off to sleep … and then the family group realised they were approaching their station, and there was another round of shouting by multiple people as the sleepy children were unwound from their puppy pile, the bags were gathered, and the pathway to the door was cleared.

And then we could sleep …

The ticket inspector woke Jenny to find out exactly which station we were going to, and when he heard it was the end of the line (Vasco Da Gama Station), he left us to sleep for as long as we wanted.

Jenny woke up when someone came around to sweep the carriage, and realised the train had been still for quite some time. She checked the platform, and sure enough, we were at Vasco Da Gama. 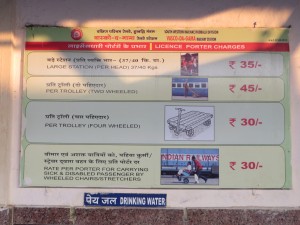 Blearily, we gathered our belongings and made our way out of the station, pausing to be bemused by the porterage rates.

And the cheapest thing of all is to get someone to carry a whole person up the stairs.

So, here we were in Goa, at 8.20 in the morning, with nowhere to sleep tonight. First step – locate internet. 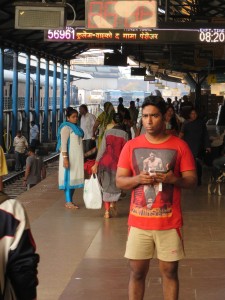 We fought our way through the taxi touts to the nearest cafe, only to run up against the weird wrinkle in Indian culture – 8.30am is too early for breakfast. The cafe only had a few baked goods from the day before’s delivery, and could make us tea and coffee.

However, it had WiFi, and beggars can’t be choosers.

While we were using the WiFi, that day’s bakery delivery arrived. It was about 9.30 by then, but no civilised person should require breakfast any earlier than that, anyway, right?

We checked out the rooms in the hotel beside the cafe, hoping they would be reasonable, and found them to be dirty and poorly maintained (we are talking cupboard doors held on by packaging tape poorly maintained, and mothballs on the drains to hide the smell dirty) – and for this, they wanted $23 dollars per night!

Eventually, we found an air BnB place with decent reviews near a beach to the south of Vasco Da Gama. It turned out to be an expensive auto-rickshaw ride to get there – much more than we would have paid for the same distance in Pune. Scratch the idea of getting a rickshaw from there to the Old Town. 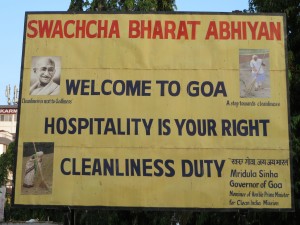 Still, after three months of not being able to swim, we were looking forward to being back on the coast. And with the lack of sleep on the train, we were going to need a recovery day anyway.

We booked the room for two nights, and hoped that it was better than the hotel we had just inspected!