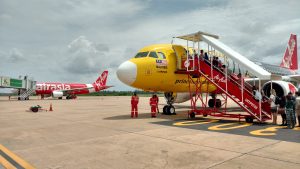 It is always both joyous and sad to hit the road again. We were looking forward to seeing our friends and family in Australia, but we would miss the friends and cats of Koh Phangan as well. As usual, we buffered the transition with a night in Surat Thani, and a few days in Kuala Lumpur. 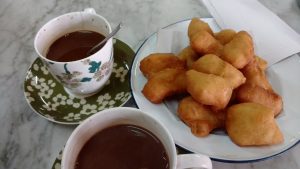 We like spending a night in Surat Thani, because the bus and ferry from the island is three and a half hours. The trip is much less stressful when delays won’t cause us to miss a flight.

We have a favourite hotel, My Place @ Surat, which is conveniently positioned 100m from the night market, and less than 100m from a traditional patong ko breakfast joint. A lovely couple in their 70s or 80s get up in the wee small hours and make a batch of dough, then start deep frying it at 6am. When it’s all gone, they close – usually around 9 or 10am. Served with viciously strong Thai coffee that is 30% condensed milk, it is a breakfast that wakes you up, and sticks to your ribs for hours! 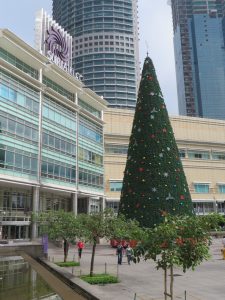 Usually, we spend a few days in Kuala Lumpur. Most often, the purpose of the stay is to get a tourist visa for Thailand,  but this time we were heading to one of the few places in the world that we don’t need a visa – Australia! Nonetheless, we spent a few days in Kuala Lumpur anyway. Our Australian passports were almost full, and we needed to apply for new ones, because they don’t add pages any more.

Kuala Lumpur was in full Christmas mode – odd, in a nominally Muslim country. There is a strong British influence, though, and they remain part of the British Commonwealth.

The Christmas efforts can be a little “over the top” and kitschy. Something that is very amusing here would be plain annoying in Australia: 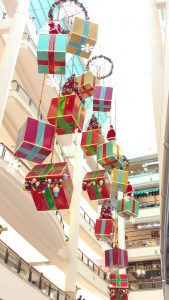 We discovered that the Australian High Commission is very close to KLCC, the Twin Towers building, which was a good thing, because apparently we had an issue with our photos.

Despite having seven years left to use the current photos in our current passports, we were required to supply new photos that were less than 6 months old. (As if you could tell, at our ages!)

The photos we carry, which were taken in Thailand, weren’t good enough quality (of course). We had to go back to KLCC to get new ones taken at the photo shop there. Fortunately, it was a short walk, and we knew the way.

The photo shop didn’t open until 10am, so we had to cool our heels and drink a coffee while we waited. 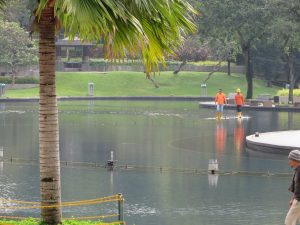 We found a coffee shop on the outside of the building, which overlooked the City Centre Park. It was fiendishly overpriced, but YOLO. We were able to watch the park maintenance staff apparently walking on water …

After we had dropped off our passport applications, we went back to the shopping centre. Time to hang out in air conditioning and look for 21st birthday presents. 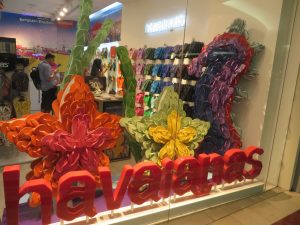 After scoping out all the jewellery shops in the KLCC shopping centre, we settled on our gifts. Christmas and 21st birthday gifts for all Jenny’s girls, including the “third twin”, Leash.

We admired the Havianas store window display (yes, those flowers are made of thongs – flipflops to you non-Australians!). The girls can be thankful they didn’t get Havianas for their 21sts. 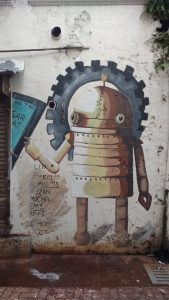 Another KL ritual is to rug up well and see a movie. Cinemas in Kuala Lumpur, for some reason, are chilled to much lower temperatures than other places. There was a cinema at KLCC, so we didn’t even need to go to the Pavilion Mall to tick off that accomplishment.

Kuala Lumpur is starting to rival Penang in terms of street art. We found this quirky little robot in a lane parallel to Jalan Petaling (Petaling Street).

We indulged our ritual of breakfast in Jenny’s favourite Chinatown cafe, Lucy in the Sky. The coffee is good, and they know how to properly scramble eggs. With butter and milk, so they are rich and soft. And the garlic mushrooms are awesome. 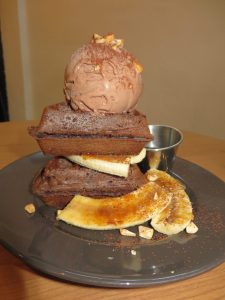 This time, we noticed a new cafe across the road from Lucy in the Sky. Feeling only slightly disloyal, we popped in the check out their offerings. The vegetarian options were a bit thin on their main menu, but their desserts were impressive. We shared this chocolate banana waffle with real maple syrup. It would be too much for one person under most circumstances!

With our routine honed to a fine art, we made it to the airport with loads of time to spare before our flight to Melbourne. The airport terminal, KLIA2, has a wide range of shops and restaurants, so it is an easy place to spend time before a flight.

Before we knew it, we were strapped in for the next leg of our journey – to Melbourne, Australia!