Last we heard, the governments of 39 countries had issued travel advisories telling their citizens not to visit Thailand. The tourist industry in Thailand is really feeling the pinch. Our last week on Koh Lipe was the beginning of High Season Proper, mid-December, and by all reports tourist numbers were 50% or less of what they were at the same time last year.

The cause for concern is the ongoing political protests, some of which have become violent, particularly in Bangkok. What is interesting to us is that we have been in Thailand the whole time this lastest political conflict has played out, mostly in the “troubled” Muslim south, and we have experienced almost nothing out of the ordinary.

That’s not to say that there’s nothing happening – it’s just that we don’t generally hang around in the cities where the things do happen.

A show of force by police and soldiers

We entered Thailand at the end of October, spent one night in Hat Yai, and then went to Koh Lipe. In early November, the government tried to pass a bill pardoning members of the previous government, some of whom are living in exile, including the brother of the current Prime Minister. This would have paved the way for his return, and that’s when the protests really got into gear. They were largely non-violent until November 30, when the first death directly attributable to the protests occurred.

In early December, there was a cease-fire for the King’s Birthday celebrations, during which (we were told) His Majesty opined that it might be a good idea for the government to step down. The opposition MPs all resigned en masse, and the government bowed to the inevitable and dissolved parliament. An election was set for Feb 2nd.

We became aware of all this through seeing Koh Lipe residents glued to TV screens, and having chats with the more politically-aware English speakers. Not a hint of strife disurbed the tropical peace on Koh Lipe. Tourists who hadn’t engaged with Thai locals would never have known anything was happening.

You might think that the calling of an election would put an end to the protests, but it didn’t. One group, the newly-created People’s Democratic Reform Committee (PDRC; literal translation of the Thai name: “People’s Committee for Absolute Democracy with the King as Head of State”) believes that the electroal process itself is so compromised that the best way forward is to appoint a temporary “reform committee” that is not popularly elected. This committee will reform things (it’s not entirely clear exactly who, or in what way, or for specifically whose benefit) and then at an undetermined future time, maybe 12-18 months later, there would be an election again.

Supporters of this notion are remarkably many, demonstrating the shallowness of the roots democracy has grown in this tropical soil. The English language broadsheet quoted the head of the armed forces saying that it didn’t seem that a military coup was necessary yet (!!), and that he hoped the democratic process would resolve the issues without the need for military intervention.

It is heart-aching to realise how little most Thai people understand about the protection a full democracy gives to their freedoms and their right to be heard. Those we spoke to didn’t seem to realise that if they give arbitrary power to someone, they lose control. Perhaps they already feel as though the “democratically elected” government is wielding arbitrary power. Or perhaps arbitrary power is the only construct they have available. The PDRC is relatively middle-class and educated, while rural and poor voters tend to support the Thaksin legacy inherent in the (now caretaker) government, but even they are agitating for the suspension of democracy.

The Prime Minister has pointed out that to suspend the democratic process would be unconstitutional, and even that information hasn’t persuaded the PDRC to relax and start election campaigning. Instead, they martialled huge numbers of protestors and set about disrupting the registration process for candidates, which was set down for Dec 27-Jan 1.

(No Christian country would do such a critical activity at that time of year, but Thailand’s Buddhist and Muslim population has no sacred days during that time.)

Over this four-day period, over 260 people died in clashes between protestors and government forces. We were in transit at that time, heading to Hat Yai for Jenny to have a blood test, and then to catch two trains to Chiang Mai via Bangkok, so we were less insulated than we had been on Koh Lipe.

There was some unusual activity in Hat Yai –  a street march the day we arrived, and a display of force by local police outside the railway station while we were waiting for our five-hours-delayed train – but it was peaceful activity, and we never felt in any way unsafe. We even left the station in Bangkok for a couple of hours, heading to a nearby shopping centre to eat sushi and buy train food supplies, and didn’t see or hear a hint of trouble.

Our friends Dan and Miri, who we met up with in Chiang Mai, did see some of the protests in Bangkok, but walked one block away and carried on without incident.

The protestors did succeed in disrupting the registrations. There are now 28 provinces with no registered candidates, mainly in the south, where we were, and 21 provinces with only one registered candidate. Unless the Electoral Commission can come up with a lawful way to allow late registrations, Thailand is heading for a constitutional crisis. Parliament can only meet to elect a Prime Minister after 75% of MPs have been endorsed (confirmed) in their seats. According to the Bangkok newspapers we were given in hospital, with 28 missing, the parliament cannot possibly reach the 75% quorum after this election.

The army standing by to maintain order

The protestors are planning two more big protest marches in Bangkok on January 7th (today) and 9th, and then a “shut-down” of Bangkok, involving cutting off electricity and water supplies, on January 13th. They have been warned that this “shut-down” is illegal, setting the stage for violent clashes as police and armed forces work to keep essential services flowing in the capital.

We are planning to spend the night of the 8th in Bangkok, as we need to get Tom’s tablet screen replaced, but hopefully we can stay somewhere in the suburbs, and if need be, we can “shelter in place” for another night, if access to the bus depot is blocked. We plan to be in Cambodia by the time the “shut-down” confrontation occurs.

If you want to follow the unfolding constitutional crisis and attendant protests, Wikipedia now has a page on the current Thai crisis – it’s usually a few days behind, but the information is mostly based on local newspaper reports, so it’s better than the general internet rumour mill.

Update as of April, 2015 : As expected, there were insufficient representatives to form a government after the 2014 election, and there was a challenge to the constitutionality of holding by-elections in the vacant seats.

After three months of protests and disruption, the army declared martial law and dismissed the government.

It should be stressed that the army has great respect for the King, and would not have done such a thing against his wishes. Despite the international press referring to it as a “military coup”, the King remains in power, completely safe, and it is only the dysfunctional and incomplete Parliament that was disbanded (having never gained the required quorum to actually form).

The army moved quickly to chalk up some quick wins – building bridges, paying rice farmers overdue money from the rice marketing monopoly, and enforcing laws that had been poorly enforced (for example, laws against encroaching on public land). They were arguably a little more zealous in their interpretations and enforcement actions than civil authorities might have been, but let’s face it, they were trained for combat, not public relations.

We were in Australia at the time of the military take-over, and returned to Thailand in October. We spent time in small rural villages, big cities, and on tourist islands, and we noticed very little difference (apart from the occasional dismembered tree that had the temerity to grow on public land and provide shade to a privately-owned restaurant – yes, really, they really did such things …), and the widespread suffering caused by international sanctions – the price of rubber dropped by 75% within weeks, and rubber is a cash crop throughout the country.

In Ton Kloi, almost all the young people (18-35) had left the village to find jobs in tourist areas, because there was hardly any work available on rubber plantations any more. 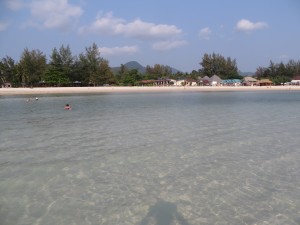 On Koh Phangan, there was some rumour that all the bungalows on Ao Strithanu had been declared as encroachments on public land, but one of the owners showed us his title deed, and it clearly said that his title extended “to the sea”. The fact that in the 40 years since his grandfather bought the land, the beach has grown 100m wider and sprouted grass on 50m of that depth does not alter his title. It’s just a blessing from whichever deity you might want to give credit to.

We were affected by that, given that we wanted to stay in one of said bungalows, but we took the risk that it would not be demolished during the period of our prepaid lease, and the risk paid off.

While we were on Koh Phangan, martial law was lifted, and enforcement was returned to the hands of the civil servants.

There is no date set for new elections, and no formal mechanism for changing the electoral process to address the concerns raised by protestors. International sanctions remain in place. People in rural areas are cutting down their rubber trees and planting oil palms. Tourist numbers remain lower than in the past.

Who knows how long the current stalemate will persist?