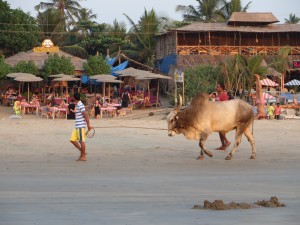 Arambol Beach is a world of its own. A mecca for yogis, hippies, and European sun-seekers, it has developed a unique culture. Here, unlike elsewhere in India, women can walk the main street in just a string bikini top and short shorts, without raising an eyebrow from the locals.

Actually, it can be hard to find a local – many of the shops and restaurants are owned and staffed by people from other parts of India, drawn here by the lure of the tourist dollars. We met people from Kashmir, Orissa, and even Nepal running businesses in the main street of Arambol Beach Road. 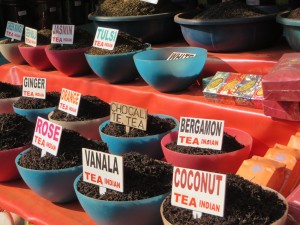 There are some pleasant results of this Westernisation – the availability of good quality bread, cakes, and ice cream, for example – and there are some down sides (like the blasting music from the wall of bars that line the beach).

We found ourselves a guesthouse run by a local family, who were lovely and welcoming, and located one of the few places with working WiFi – a new restaurant conveniently located right next door to our guesthouse. This became our office – the internet was painfully slow, and often dropped out for periods of minutes or hours, but it was better than anywhere else.

Arambol beach is not a place for digital nomads!

Truth be told, we would have to say that India in general is not a place for digital nomads. Internet access is difficult and expensive, and the quality of the connection is generally very poor compared with places like Malaysia and Cambodia. 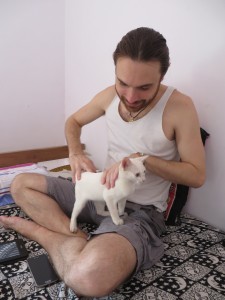 Our guesthouse had the kitten add-on enabled, and we enjoyed the antics of two kittens as they clambered around the rafters in the outdoor area.

One day, we came home from the “office” to find a mewing white kitten INSIDE our apartment! He made himself at home on our laps, and did his “mighty hunter” routine on our toes before heading off out a window we had left open for him.

A couple of days later, we saw him again outside, and he had grown MASSIVELY.

It took us some time to realise that there was another pure white cat around – and she was fully grown. And pregnant!

She also showed up inside our apartment one day, and settled down to spend the night curled up between us.

We never saw the two of the together, but he was definitely smaller, with definite little balls forming at the back, and she was larger (although still quite small for an adult cat), with no little balls.

Arambol is in Goa, so nominally most of the population is Christian, thanks to the Portuguese. However, Christianity came to India in the first century, and when the Portuguese arrived, they found people practising a version of Christianity that was indistinguishable from Hinduism. Jesus was an avatar of Vishnu, just like Krishna, and people made pujas to him and placed flowers and incense on altars in front of images of him. 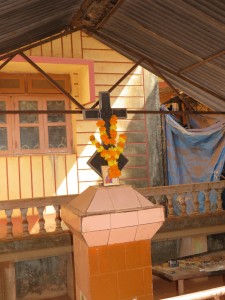 The Portuguese wasted no time reining in these heretical pagan tendencies with threats of fire and brimstone (and sometimes pogroms and inquisitions). However, cultural inertia is very strong in a population as large as India’s, so even today, after 400 years of the Catholic Church’s very best efforts, you need to squint hard to see whether the flower-garlanded icon in the roadside shrine is Ganesha or a Christian saint! (This one is a Christian saint …)

The Christian churches in Goa are also influenced by the local culture when it comes to bling. Strings of flashing disco lights and other such visual entertainment are plastered all over the traditional architecture of European Catholic churches, creating a fascinating experience for those wandering around Goa at night (we later saw the same phenomenon in Kerala, but more of that in a later post)! 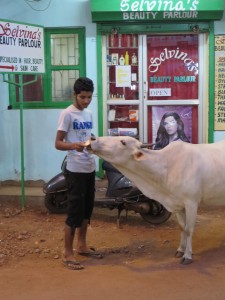 Cows were a feature in Goa, as they are everywhere in India, despite the nominal Christianity of the area. Of course, there are lots of immigrant workers from other parts of India, but even the Christians view the cows as beings to be fed rather than eaten.

There is no move to ban the selling of beef in Goa, though, and the Muslim minority happily chow down on beef curries. Hindu nationalists have been agitating for bans in other parts of India.

In Rishikesh, for example, in the north, all meat is banned from sale, and there was a lively debate raging in Maharastra (the state containing Mumbai and Pune) about whether or not to ban beef in that state.

In some places, Muslims have been dragged from their homes and beaten on the suspicion that they may have slaughtered a cow.

Who would have known that food regulations were such a minefield of nationalism, religious intolerance, and civil disturbance?