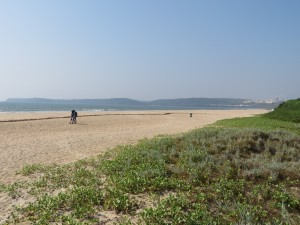 Velsao Beach is just south of Vasco Da Gama, the terminus station for the Goa Express.

We had booked a homestay room, and the house was on a dirt track between the main road and the beach. It took some driving around in the auto-rickshaw and asking three people for directions before we finally found the house.

The owners were lovely, and suggested we switch from the room we had booked to their other room. Not only was it larger, with an ensuite, but it was also on the other side of the house from the construction happening next door. 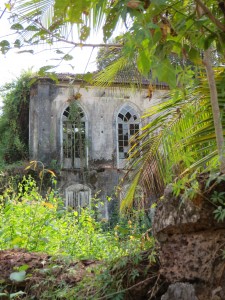 After showering, we set off to walk to the nearest restaurant for lunch. Hopefully, they are open for business at 2:30 in the afternoon …

Goa was a Portuguese settlement, so there is a lot of European influence in the architecture. Some houses are beautifully maintained, and others seem completely abandoned.

Goa was independent of India until 1961, when it was invaded and conquered, and made part of India. For this reason, even to this day, the culture in Goa is much more European than in other parts of India.

Everyone we met seemed to speak very good English, compared with the general population in Pune. Again, our Hindi knowledge was pretty much useless here.

We had a fantastic meal at a family-run restaurant in 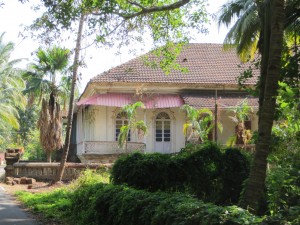 the middle of nowhere, and then went back home to rest.

First order of business was a nap, after our horror train trip in the third class sleeper carriage (never again!), and then we walked past the sports ground and through a coconut palm plantation to reach the beach.

It was incredibly hot, and we were hanging out for a swim! 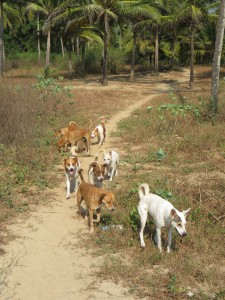 We met a friendly dog in the coconut plantation, which followed us along the path. As we crossed from one plantation to the next, we discovered why. There was an enormous pack of dogs living on the property next door. They made lots of noise at our new friend, but didn’t dare to physically attack her while she was with us.

When we went through the dunes to the sand, the entire mob of dogs followed us, and joined forces with another mob of dogs on the beach. Our friend stayed right by our legs the whole time we were on the beach, except when we were both in the water at the same time.

It was amazing to be back in the ocean, after so much time inland. We got to see the ocean on our unscheduled trip to New Zealand for a family funeral, but it was way too cold to contemplate taking off the jeans and jumpers to actually swim! 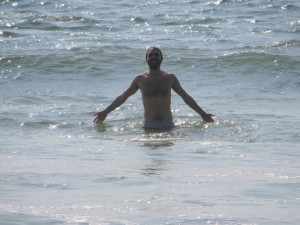 Apart from that windswept and chilly glance at the ocean in New Zealand, it had been almost four months since we were on a tropical beach. Way too long!

It was close to sunset, so we didn’t linger too long in the water.

As we were drying off, if became apparent why there were so many dogs in this pack, and why our canine friend wanted nothing to do with them.Almost all of the dogs in 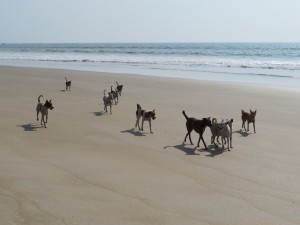 this pack (about fifteen of them) were male. Entire males, because nobody bothers neutering a male animal in these parts of the world.

And there was one female, who was, from the behaviour of the males, obviously in heat.

There was much argy bargy between the male dogs, and after a few minutes of watching, we identified the alpha male.

After running off the other contenders, he had his way with the female, ending up, as dogs do, in the traditional push-me-pull-you arrangement, where the male and female are locked together for 20 minutes or so after mating. Experienced males learn how to swing a rear leg over the female’s back, so they can stand on all four legs for this waiting period. It is hard to imagine how the anatomy deals with the 180-degree twist, but they seem quite relaxed as they stand butt-to-butt, waiting for the eventual release. 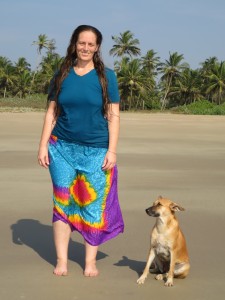 However, in this situation, the 14 or so beta males were impatient, and they kept climbing on to the junction between the interlocked pair, and trying to get their end in as well. Sometimes two of them at once! Much growling and snarling ensued.

Our little friend stayed as far away from them as she could. She obviously liked the beach, but felt it wasn’t safe to come out here without human chaperones. We understood her concern!

She walked back with us, not just to where we had met her, but all the way to the house where we were staying, despite some aggressive barking from a dog living along the path. 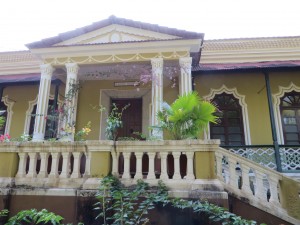 The next day, we walked in the other direction, across the railway line, and found a small shop selling tea, bread rolls, samosas, and bhaji (which is potato curry here, not deep-fried patties with onion. Oh well, chalk that up to experience …)

What made this place incredible, though, was that it had WiFi!

A tiny little place in the middle of nowhere, 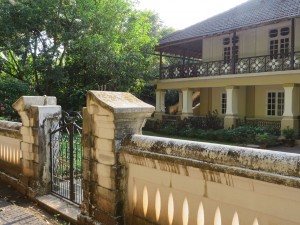 and it had better WiFi than the fancy Cafe Coffee Day places in Pune, which charged 70 rupees for a cappuccino.

There was also a general store, which meant we could buy eggs, butter, and other staples to cook our own food in the homestay kitchen.

After another rest, we set out again to the family restaurant for an early dinner. The food was so good, we figured, why go anywhere else? 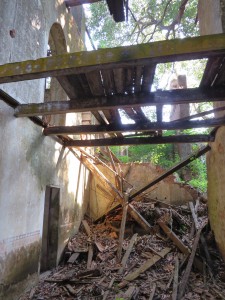 Along the way, we stopped in to explore the abandoned house we had seen the day before.

The rooms were quite large, and the ceilings very high. It must have been a pretty posh house, in its day.

We found the ruins of the staircase, but neither of us was shod for climbing, so we didn’t risk the partially-collapsed upstairs flooring.

Despite the missing roof and exposure to the elements, the interior walls still had the plaster and stencilled designs of a vanished age of elegance.

As it turned out, the restaurant was closed (open at 2.30pm, but closed at 6pm – Indians eat all their meals much later than Europeans!), so we walked into the next town, where there were “fast food” places that serve food at such a ridiculously early hour. (Don’t try to find a restaurant open before 7pm in India …)

And then it was home for a good night’s sleep before our journey to Arambol.

Faced with the prospect of a US$50 taxi fare from Velsao to Arambol, we decided to go with the local buses instead, even though it would require taking a series of buses. 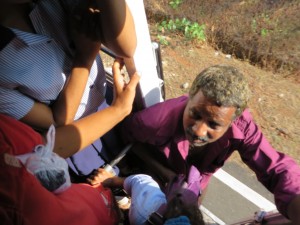 We managed it without much incident, and we got seats on the first bus (Velsao to Vasco Da Gama), the second bus (Vasco to Panjim), and the third bus (Panjim to Mapusa), but then our luck ran out, and we spent the last leg standing in an incredibly crowded but from Mapusa to Arambol. Jenny was wedged behind the door, which couldn’t be closed because there were three or four school children and the bus conductor riding on the steps. Actually, the conductor was outside the bus, holding on, for the first half of the journey! 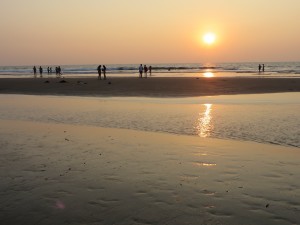 At last we reached Arambol, and managed to find a taxi to take us the last kilometre to our guesthouse. Hot, dusty, and exhausted, since the four-bus epic journey had consumed an entire day. But, hey, we saved $41!

And a sunset swim fixes everything …