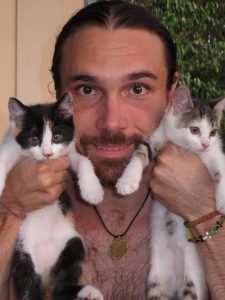 We were not catless for long. Kittens were in the air …

Even before we moved, a friend had asked us if we wanted a kitten. A semi-stray cat had chosen his kitchen as the place to give birth on March 1st, and he was trying to find homes for the four resulting bundles of joy.

We weren’t really in a position to take on the responsibility of having a cat. We had no idea what our movements would be after September.

During the first two weeks of April, however, the situation changed. Two of the kittens died. The runt, who was very thin and not eating when we visited them in late March, died. A few days later, the smaller calico fell off the balcony, about a 1.5m drop, and died a couple of days later. We were never sure if the fall was the cause of death, or whether the fall was caused by an illness that eventually took her life.

So Francisco was down to two kittens. He wanted them both to be waiting for him when he came back to the island in December. We agreed to take care of them while he was away. We figured it would be easy to find someone to bridge the gap between us leaving in September and him returning on December 1st. 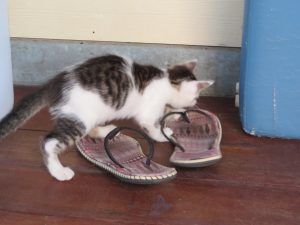 We called the calico kitten Xena (warrior princess), because we felt Francisco’s name for her (Gremlin) was a little bit undignified. The tabby we called Freya (instead of Francisco’s name “Plankton”). They will just have to get used to having multiple names!

Freya was very smart, but mischievous, so the solid Xena became the model student. It didn’t take her long to know which surfaces were out of bounds. She would look up, think about jumping, and then lick herself furiously in shame.

Freya, on the other hand, would just jump up, and then find herself grabbed by the scruff of the neck and tossed outside. No matter how often it happened, she never seemed to get a grasp on her impulse control.

Raising these two inspired an ongoing series of Facebook posts entitled “The Ten Commandments for Kittens.” 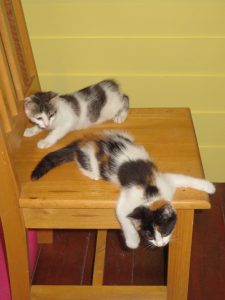 The Complete Ten Commandments For Kittens

1. Thou shalt not climb the humans when they are naked.

2. Thou shalt not pee on the broom.

First amendment to the Second Commandment
Also, thou shalt not attempt to ride on the broom while the humans are using it. Nor shalt thou knock the broom over into the dirt.

3. Thou shalt not launch a surprise attack on thy sister while she is pooping.

4. Thou shalt not shred thy neighbour’s yoga mat.

5. Thou shalt not somersault into the kitty litter poop scoop. 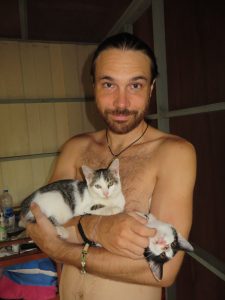 6. Thou shalt not push things off the kitchen shelves. Especially breakable things. And containers full of small objects.

7. Thou shalt not use sleeping humans as defensive terrain.

8. Thou shalt not play with the electronic equipment. In particular, thou shalt not sneak up behind the laptop, grab the top of the screen, and pull it over backwards. Nor shalt thou interfere with the tablet while the humans are playing interactive games. Nor shalt thou gnaw on the headphone cables. And thou shalt especially not launch surprise attacks on the typing fingers from the bedhead. Or from beside the pillow. Or from the bedside table. 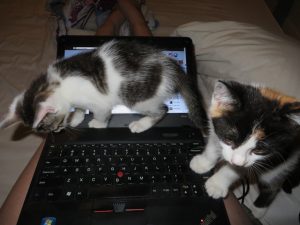 9. Thou shalt not leap into the toilet while Daddy is peeing.

11. Thou shalt clean thy butt thoroughly after pooping.

12. Thou shalt not sleep in the kitchen sink.

First amendment to the Twelfth Commandment
Nor shalt thou sleep in the draining rack with the clean dishes.

13. Thou shalt not shred the toilet paper.

There were other things happening during this time, apart from the kittens. Francisco left mid-April, when the kittens were six weeks old, so we had two weeks to settle in to the new house before our young’uns arrived. 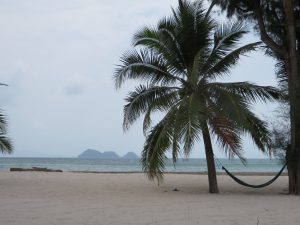 We finished Level 6 and started Level 7 hatha yoga at Agama. We were both scheduled to assist on the 2016 Agama Tantra Initiation, a six-week intensive that we had completed the year before. Jenny had spent a lot of time in India and during March rewriting the course papers for the three week-long Tantra courses, and for the ATI itself.

During April, we were helping out with enrolling students for that program, including running a one-day course entitled “Tantric Relationships for Singles”. As it turned out, the course was only three-quarters full, so Ravi was not required. This was somewhat of a relief, because he was finding himself very pressed for time.

Jenny assisted on, and Ravi participated in, the Tantric Lovers program in April, as well. Completing this course is a prerequisite for the Tantra Instructor Training, which would run after the ATI. Ravi wasn’t sure he wanted to do the course, but he wanted to complete the prerequisites, so he had the option.

The Goddess Festival at Agama ran concurrently with the Tantric Lovers workshop, and Jenny was MC at the final puja for the Mahavidyas (the Ten Aspects of Shakti), so she was very stressed and exhausted by the time that ceremony was completed.

After the Tantric Lovers workshop, Ravi was overwhelmed with requests from women to help them work through relationship issues. It was a very hectic social time, and he actually started valuing his skills as a professional relationship coach, and asking for payment for sessions. 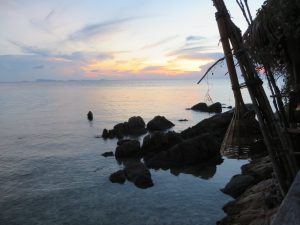 The ATI started in May, just before Jenny’s birthday, so we had a special dinner at a lovely restaurant on the point at Haad Son. 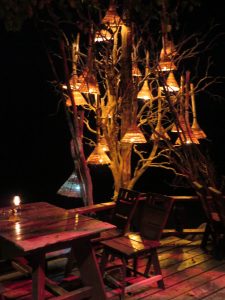 Sunset is the perfect time to go to Haad Son, as you can enjoy the view of the sun going down, and then the magical effect of the lighting in the whimsical structures. The restaurant has white sand, wooden platforms, long swings, hammocks, and a tree full of fairy lanterns.

The rains were late this year, so April was mostly dry, and it just got hotter and hotter.

By the time the ATI started, we were having days with a top of 37 (feels like 44), and all we wanted to do was hunt down air conditioning! The house was uninhabitable during the day, even with all the fans on full strength. 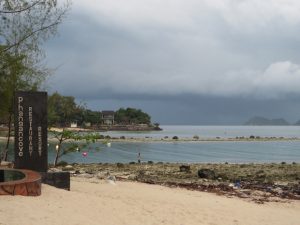 Finally, in the middle of May, the weather broke, and the rains arrived.

We didn’t even mind that the skies were grey and the ocean less intensely blue-green, because the temperature was so much more manageable.

The rainy season on Koh Phangan is barely damp, compared with the rains in Ton Kloi. Some days, it doesn’t rain at all. When it does rain, it is a downpour for an hour or two, and then it clears up.

They have done some drainage work in the past two years, so the road doesn’t become a multi-day puddle after a storm. An hour or three, and the roads are clear again.

Life was altogether more pleasant, and we were able to worry less about escaping the heat, and more about the people we were supporting.