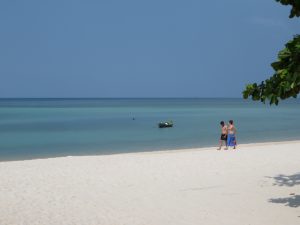 Srithanu was full of surprises when we returned to Koh Phangan.

We had called ahead to Laem Son Resort, our usual go-to place for our first night, or even a few days, and booked a fan bungalow. This is the place where we spent our first four weeks on Koh Phangan in 2014, and the place where we brought Erin and Leash in November of that year.
When we arrived, they didn’t have a bungalow for us because “someone booked it online”.

Turns out they had built some air conditioned rooms while we were away, and if we wanted to stay there, we had to pay 1500 THB for an air con room. 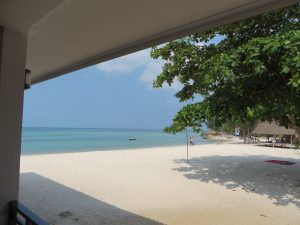 After one night, we were assured, someone would check out, and we could have the 500 THB fan bungalow we had booked.

It was annoying but we didn’t want to trek around with backpacks to see if we could find a last-minute vacancy anywhere else.

And the room was very, very nice – white bathrobes, beach towels and bath towels supplied, white sheets – it was 5 star quality. And right on the sand. 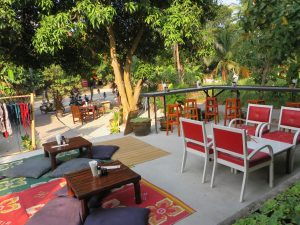 As promised, we were able to move to a fan bungalow the next day. It took Samsii  (the three-colour cat who had kittens last year) less than 24 hours to discover our presence and demand the return of The Food Bowl.

The next surprise was the new location of our favourite restaurant – Taboon.

We had waited impatiently for Taboon to open in 2015, and were one of the very first customers. Clara and Guy, the owners, are good friends. Clara especially just radiates love, and it comes through in the vibe of the restaurant. 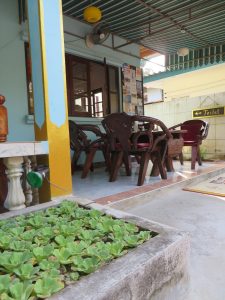 While we were in India, Taboon moved from its corner location in the centre of the Srithanu shopping strip to a separate building near the lake.

Taboon’s cappucinos were a highlight of Jenny’s day, and Ravi has his own version of malawach. He calls it “matbuhawach”, because he replaces the traditional lemony tomato dressing in the malawach with matbuha sauce. Matbuha is made from roasted capsicum and tomato, and it is rich and delicious. The rest of the dish is hard-boiled egg, sliced, and two pan-breads. Oily, crispy, goodness …

We registered for our next Agama level, Level 6, which started the day after we arrived, and then started the complex process of settling in for a 6-month stay.

Our first order of business was to find ourselves a long-term place to stay in Srithanu. If we were going to pay 500 THB per night, we should be able to get a house with a kitchen and air conditioning. A good upgrade on the one-room fan bungalow at Laem Son, even if said bungalow was right on the beach at Ao Srithanu. 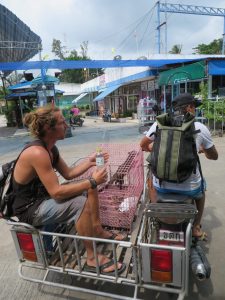 During this time, we found a sad sight at the service station where we buy petrol in Thongsala. They usually have a few birds and chooks in cages there, but this time when we arrived, we saw a very unhappy civet in a wire cage with no food or water.

We gave ti some water, and it made grumpy noises at us, but greedily lapped up the water.

Fortunately, some tourists had come along just before us, been equally shocked, and bought the civet on the spot. We watched them load it on to a sidecar for a short trip back to the national park, where they would release it.

These civets are the famous “expensive coffee” civets. In the wild, they eat coffee fruit, and poop out the coffee beans. Their digestive acids make changes to the coffee beans, which give them a special flavour.

Do not ask “that guy who first cleaned and roasted coffee beans from civet poop … what was he thinking?”

There are some things we just cannot comprehend.

Unfortunately, the demand for civet poop coffee far outstrips the amount of wild civet poop that can be collected, and civet poop farming has become a thing. Sad, deprived civets are kept in cages and fed nothing but coffee fruits (a very unnatural diet).

So there is good ethical reason to avoid drinking civet poop coffee.

These frogs are quite common, and are mostly nocturnal. Every now and again, you find a mute testament to an incident of frog-meets-taxi-truck.

A moment of silence for the Unknown Frog, please.

After much back-and-forth, and nail-biting, we finally secured a sublet from a friend of ours, who was going to be off the island for two to eight months.

Not to worry about the uncertainty of her movements, she said. If she came back before we left in September, she could always stay somewhere else.

And then a miracle happened. 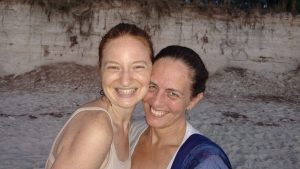 We were assisting on a Tantra workshop, and this lovely woman enquired whether we did space-holding or therapeutic work outside the Tantra workshops.

We knew Grace, because she was one of the teachers for our Agama Level 1 intensive. She was in the Tantra workshop with her partner S’ra.

Magically, we hit it off in every possible combination – Ravi with Grace, Jenny with Grace, Ravi with S’ra, Jenny with S’ra, and the four of us together. Unfortunately, S’ra left two days later, and Grace left five days later, so we weren’t able to fully explore the connections. However, we look forward to meeting again in various parts of the world.

Before we knew it, the month was ending, and it was time to move into our new house – with a real kitchen! 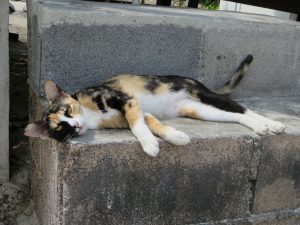 The owner of Laem Son told us we could take Samsii with us – she was fairly obviously pregnant again, and the owner sensed an opportunity to palm off the kittens – but we didn’t want to remove her from her known sources of food. We were also worried that she might start crossing the main road between our new place and her old territory.

We would move catlessly to Bam Bam Nature House.