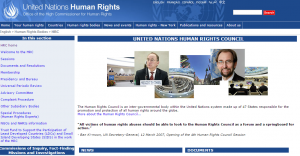 A Special Report to the UN Human Rights Council

On June 17, 2015, the United Nations special rapporteur on freedom of expression presented his report on the use of encryption and anonymity in digital communication to the UN Human Rights Council.

The report concludes that “encryption and anonymity enable individuals to exercise their rights to freedom of opinion and expression in the digital age and, as such, deserve strong protection.”

If you want the short version – governments and criminal organisations are making the internet less private and secure for you, which is a violation of your human rights.

So, you need to get yourself a VPN (virtual private network). Apart from security, there are a number of other important benefits of using a VPN. We will shortly publish a comparison of the major providers of VPN services, but if you don’t want to wait for that to be published, (spoiler alert!) we end up recommending one called Private Internet Access.

And now for some quotes from the UN Special Report (headings are our guide to help you navigate the content):

How is your right to online privacy being undermined, and what can you do to protect yourself?

Encryption — a mathematical “process of converting messages, information, or data into a form unreadable by anyone except the intended recipient” (SANS Institute, “History of encryption” 2001) — protects the confidentiality and integrity of content against third-party access or manipulation. Strong encryption, once the sole province of militaries and intelligence services, is now publicly accessible and often freely available to secure e-mail, voice communication, images, hard drives and website browsers.

Users seeking to ensure full anonymity or mask their identity (such as hiding the original IP address) against State or criminal intrusion may use tools such as virtual private networks (VPNs), proxy services, anonymizing networks and software, and peer-to-peer networks.

One well-known anonymity tool, the Tor network, deploys more than 6,000 decentralized computer servers around the world to receive and relay data multiple times so as to hide identifying information about the end points, creating strong anonymity for its users.

The trend lines regarding security and privacy online are deeply worrying. States often fail to provide public justification to support restrictions. Encrypted and anonymous communications may frustrate law enforcement and counter-terrorism officials, and they complicate surveillance, but State authorities have not generally identified situations where a restriction [of online privacy] has been necessary to achieve a legitimate goal.

Efforts to restrict encryption and anonymity also tend to be quick reactions to terrorism, even when the attackers themselves are not alleged to have used encryption or anonymity to plan or carry out an attack. Moreover, even where the restriction is arguably in pursuit of a legitimate interest, many laws and policies regularly do not meet the standards of necessity and proportionality.

Gathering information about you without a warrant

Broad mandatory data retention policies limit an individual’s ability to remain anonymous. A State’s ability to require Internet service and telecommunications providers to collect and store records documenting the online activities of all users has inevitably resulted in the State having everyone’s digital footprint. A State’s ability to collect and retain personal records expands its capacity to conduct surveillance and increases the potential for theft and disclosure of individual information.

Restricting your freedom of speech

The right to freedom of expression under article 19 (2) of the International Covenant on Civil and Political Rights expands upon the Universal Declaration’s already broad guarantee, protecting the “freedom to seek, receive and impart information and ideas of all kinds, regardless of frontiers, either orally, in writing or in print, in the form of art, or through any other media of his choice”.

In environments of prevalent censorship, individuals may be forced to rely on encryption and anonymity in order to circumvent restrictions and exercise the right to seek, receive and impart information.

Some States filter or block data on the basis of keywords, denying access by deploying technologies that rely on access to text. Encryption enables an individual to avoid such filtering, allowing information to flow across borders.

Discussions of encryption and anonymity have all too often focused only on their potential use for criminal purposes in times of terrorism. But emergency situations do not relieve States of the obligation to ensure respect for international human rights law.

States should promote strong encryption and anonymity. National laws should recognize that individuals are free to protect the privacy of their digital communications by using encryption technology and tools that allow anonymity online.

States should not restrict encryption and anonymity, which facilitate and often enable the rights to freedom of opinion and expression. Blanket prohibitions fail to be necessary and proportionate. States should avoid all measures that weaken the security that individuals may enjoy online, such as backdoors, weak encryption standards and key escrows. In addition, States should refrain from making the identification of users a condition for access to digital communications and online services and requiring SIM card registration for mobile users.

You can download the full text of the June 17 Special Report as a Word document.

Do you want to do something about it right now?

The easiest way to protect yourself against State censorship, metadata retention, and other interference with your human rights online is to get yourself a VPN (virtual private network).

Get your seven day trial of Private Internet Access now.